Asbestos is a group of minerals that occur naturally as bundles of fibers. These fibers, found in soil and rocks in many parts of the world, are made of silicon, oxygen, and other elements. There are 2 main types of asbestos fibers:

Amphiboles (particularly crocidolite) are considered to be more likely to cause cancer, but even the more commonly used chrysotile fibers have been linked to cancer.

Asbestos fibers are strong, resistant to heat and to many chemicals, and do not conduct electricity. As a result, asbestos has been used as an insulating material since ancient times. Since the industrial revolution, asbestos has been used to insulate factories, schools, homes, and ships, and to make automobile brake and clutch parts, roofing shingles, ceiling and floor tiles, cement, textiles, and hundreds of other products.

During the first half of the 1900s, growing evidence showed that breathing in asbestos caused scarring of the lungs. In the early 1900s, exposure to asbestos dust in the workplace was not controlled. Beginning in England in the 1930s, steps were taken to protect workers in the asbestos industry by installing ventilation and exhaust systems. However, in the huge shipbuilding effort during World War II, large numbers of workers were exposed to high levels of asbestos. 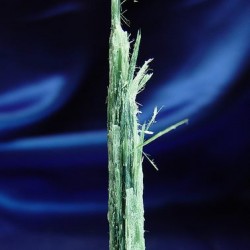 As asbestos-related cancers became better recognized in the second half of the 20th century, measures were taken to reduce exposure, including establishing exposure standards. In addition to more careful handling, there has been a dramatic decrease in the import and use of asbestos since the mid-1960s, and alternative insulating materials have been developed. As a result, asbestos exposure has dropped dramatically in the United States. However, it is still used in some products, and there is still a potential for exposure to asbestos in older buildings, water pipes, and other settings. Heavier asbestos use continues in many other countries as well.